If you’re looking to build the ultimate Christmas village display, it would’t be complete without the addition of a model ski lift or cable car/gondola. More than any other unit that could be included, nothing else quite compares to the grandeur that is provided by the appearance of gondolas traversing the skyline of your model winter wonderland scene. So what models are available and which would make the most suitable choice for a Christmas village display?

Christmas village manufacturers have long been aware of the appeal of adding cable cars to a village scene and a number of brands have introduced ski lift and gondola models of their own to fulfil this need. Lemax produced the somewhat cheap feeling Lemax Ski Gondola, which consisted of two plastic terminals and two gondola cars, with adjustable speed control. It was lightweight and appeared somewhat flimsy but it served its purpose. 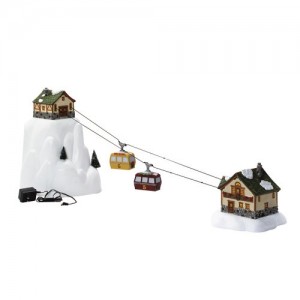 Department 56 introduced their much more robust Department 56 Animated Gondola, which was a far more substantial model. This again consisted of two cable cars that moved back and forth between one lower station building and another atop a mountain unit. Images we’ve seen of this model in use makes the two cable cars look quite heavy for their cables, resulting in a slightly unnatural bouncing motion as it moves along the line.

The St Nicholas Square brand produced a variation on the theme for their village collection, with the St Nicholas Square Ski Hill. This large, single piece unit consists of a mountain ski slope, again with a building both at the top and bottom of the unit with individual skiers on skis being pulled up the slope and others skiing back down the other side.

Mr Christmas, who are perhaps best known for their animations, also entered the fray with their Mr Christmas Cable Cars, a similar single piece unit and this attractive animated model has skiers coming down the slope while two gondolas go back and forth above, between the two station buildings. 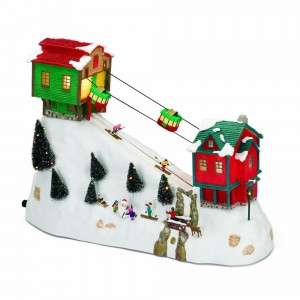 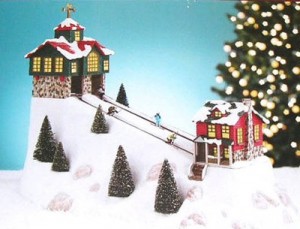 For us though, whilst some of these are quite attractive and fun items, none quite achieve the overall effect we are looking to create with our own display. If you really want to crank up the style and create something with real impact for that wow factor, then it has to be a cable car system from Jaegerndorfer. 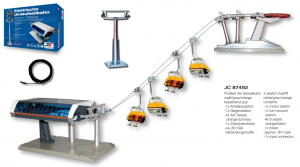 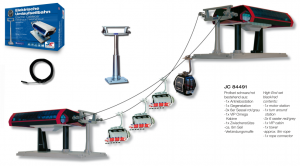 Jaegerndorfer (Jägerndorfer) are manufacturers of scale model trains, cable cars and associated accessories. The models they produce, while not as cheap as some other options, are serious pieces of kit. A Jägerndorfer cable car will take your Christmas village display to a whole new level.

This brings us back to the question of scale. Jägerndorfer produce models in two different scales, 1:87 and 1:32. Christmas village brands do not usually work to scale so there is no definitive answer as to which size to go with and you should go with whatever you feel fits with your display best. As we discussed in our article, Choosing A Train Set For Your Christmas Village, we like On30 scale trains, which is the equivalent of 1:48. If you are using a train of this or similar scale, then your best match for a cable car is probably to go with 1:32. However, if you are using a HO scale train (1:87) then it might make sense to use the same for your cable car. Even if it is a little smaller than ideal, you may find it looks better than if you were to introduce another new size.

The videos below show Jägerndorfer cable car models in use within a village display, the first is 1:87 scale and the second is 1:32.