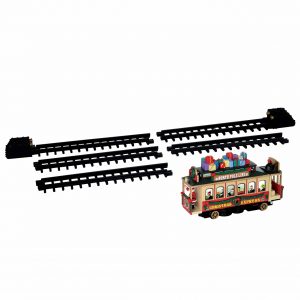 As Christmas village layouts are often limited in space, cable cars or trams can be an ideal alternative to using train sets in your display. Train sets require a circuit and depending on the scale of train set you use, a turning circle is likely to be a metre or more in diameter.

A tram system has the advantage of being able to operate end to end rather than on a circuit and can therefore occupy a much smaller space, anything from a few sections of track but can also be more extensive if required. The vehicles themselves appear much the same at both ends and so do not look odd when travelling in reverse, as a train would if running backwards.

The simplest means of adding a tram system to your Christmas village display would be to include the complete set that is produced by Lemax. Lemax Santa’s Cable Car is an all-in-one solution that contains the model cable car plus five sections of track, two of which are end pieces that will cause the tram to stop and return the way it came, enabling a continuous back and forth motion. This relatively inexpensive option is perhaps the most feasible for smaller Christmas village displays. Additional straight and curved track extensions are available.

Model trams are generally not as popular as train sets would be and as such alternatives are a little limited. Static models are certainly possible and some of these are particularly attractive but automated units are harder to come by. Add to this the question of scale (O gauge/On30 or similar are probably most suitable for Christmas village use) and options are limited further still.

One source of tram systems in an appropriate scale is Bachmann. Bachmann are a well-known model manufacturer, mostly of train sets but they also have a number of trams or trolley cars in production. The majority of these would be HO scale which is slightly smaller than ideal, although certainly not unworkable, within a Christmas village display. However, they also have a number of O gauge and also On30 models, the latter of which is particularly useful as this has the advantage of a larger size appropriate to Christmas village use while running on readily available HO track. 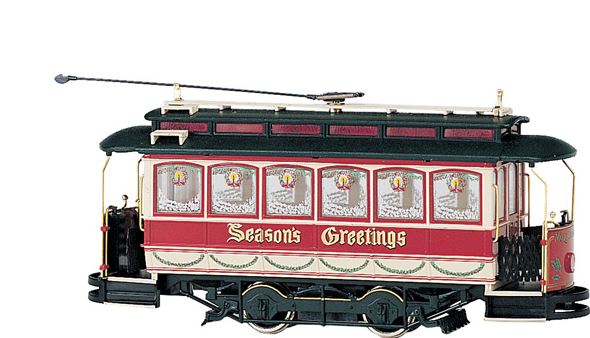 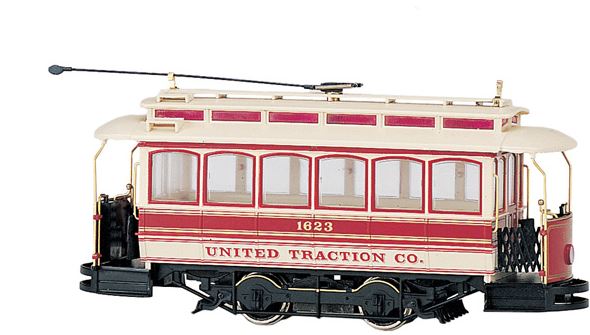 Bachmann manufacture a rather nice On30 scale trolley car, Union Traction Street Car. This unit comes complete with headlights and lighted interior and is our favourite option for a Christmas village display. They also produce a Christmas themed version in their Christmas Street Car. This model is also available as a ready to go set and comes complete with 3 pieces of straight, 4 pieces of curved auto-reversing track, station house, Hayes bumper and variable speed control.

This is the Bachmann Union Traction Street Car in On30 scale (note that this model has been modified for sound):