As is customary, manufacturers Enesco introduce new models to the Lilliput Lane brand in January each year. For 2016, we see two new additions to the Christmas collection. We have one new hanging ornament and also a feature illuminated design.

First up is Lilliput Lane Christmas Tipple Hanging Ornament (L3789). This inexpensive decorative piece is based on an historic public house in London. Situated on Fleet Street, The Tipperary was named after the song “Its A Long Way To Tipperary” following the First World War which was a favourite among its primarily Irish servicemen clientele. The pub was the first Irish themed pub and the first to sell Guinness outside of Ireland.

This model includes the loop at the top to enable hanging on the Christmas tree.

Christmas At The Inn 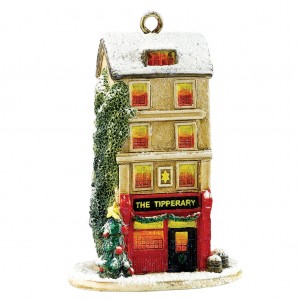 The other new Christmas model to be introduced in January 2016 is Lilliput Lane Christmas At The Inn (L3775). This miniature reproduction of The George Inn in Lacock, Wiltshire has been seen in a number of movies, including Cranford, Emma, Harry Potter, Moll Flanders, Pride And Prejudice and even Wolfman. The building dates back to the fourteenth century and of course being a Christmas edition has been given the snowed winter treatment. This is also a special illuminated model and can be run on two AA batteries or a 3 volt adaptor.

Lilliput Lane have once again surpassed expectations and Christmas At The Inn is a fabulous addition to the Snowed Cottages series. The detailing is superb and the outdoor tree and wreath on the door provide a Christmassy feel. The added illumination enhances the impression of a cozy atmosphere within. Plenty of appeal and sure to become a collector favourite.