One of the things that makes a modern Christmas village so exciting is the possibility of introducing animation. The rows of quaint little houses with their warm lights glowing from within have a charm all of their own but the addition of movement really helps bring a miniature town to life. There are many ready-made features available and numerous ways of achieving this. One of the best of those is with an animated skating pond or ice rink.

The very thought of an outdoor ice skating rink conjures up romantic images of movie scenes featuring Christmas in New York. Little wonder then that the Christmas village brands were quick to recognise the potential for animated ice skating displays. 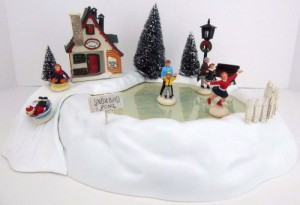 As early as 1995, Lemax were producing animated skating models under their now defunct Hearthside and Dickensvale brand names. The Dickensvale Animated Skating Pond was a somewhat chunky model which featured five skating figurines, two pairs and one solo. The scene was enhanced with a sled rental building and sledding chute, in use, to the side and furnished with a lamp, bench and fir trees.

Lemax have since added a number of new animated skating ponds to their ranges, some of which remain current models. Several other manufacturers have also introduced similar items, notably Department 56 who offer some of the most attractive we’ve seen.

Among the more recent models, Lemax have both simple versions and also more extensive scenes. Lemax’s Winter Skating and Skating In The Park, Set Of 8 are both quite similar in design. Each features three skating units, a pair of trees, a bench and a lamppost. The styling of each are different but similar. Both are reminiscent of the Victorian era and are therefore perhaps best suited to accompany the Caddington Village series. 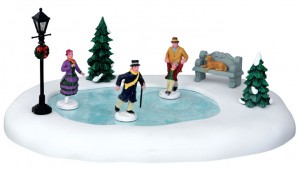 Lemax Skating In The Park

It’s a question of personal taste but we find the movement that accompanies the Department 56 models to be a little more fluid and therefore slightly more realistic. Department 56’s New Animated Skating Pond is a particularly attractive piece, featuring four sets of skaters in more natural surroundings. The gently contoured base and variety of trees provide a more out-of-town feel and the onlooking snowman figure adds a touch of fun.

The most complete scene is found in Lemax’s Village Skating Pond With Sound, Set Of 18. This ambitious model includes no less than eight skating units, a hot cocoa stand, tree, lamppost and a whole host of onlookers and passers-by. 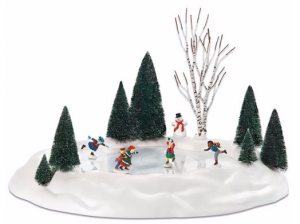 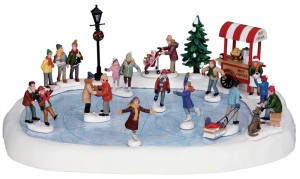 Some variations have unsurprisingly been created too, with hockey matches being a common alternative theme. Both Lemax and Department 56 have produced animated ice hockey models. Lemax have two simpler models in their After School Hockey Match and Holiday Hockey, Set Of 8. They also have the much more complex Hockey In The Park, Set Of 19. This last model features a full-on hockey match with seven skating units all dressed in full hockey kit, a goal net including keeper, a hot food vendor, lamppost and several spectators and supporters. 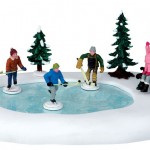 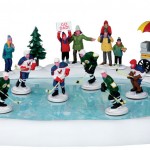 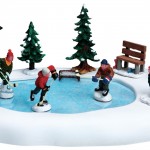 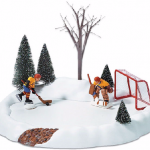 Department 56’s Hockey Practice Animated, while more modest in scale, has some fine detail to the figurines and goal and also makes use of a puck which perhaps makes this the model with the most realism. 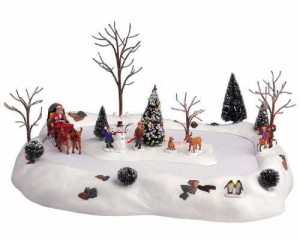 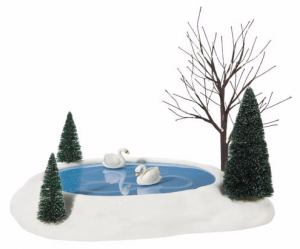 Some other interesting variations have included animal displays such as Department 56’s Animated Swan Pond and even Santa and his sleigh in Lemax’s early model, Santa And Reindeer Ready To Go.